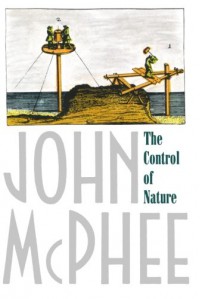 This book is about people living in places where nature is in a state of constant change, and the extraordinary lengths they go to try to control the ultimately uncontrollable forces. It would be funny if it was fiction. A sheriff survives the inundation of his neighborhood by a massive debris slug only because it tosses him into the back of a pickup truck being carried along in the mud and boulders along with parts of houses. The absurdity of many of the eco-meets-ego situations reaches the Carl Hiaasen level, except these stories don’t take place in Florida. And they are real.

Written in 1989, Control of Nature analyzes the economic, social and geological forces behind three man-vs.-nature struggles: the attempt to force the Mississippi River to behave in the way that permanently settled  human communities want it to, and not to change course when it naturally would have done so; the fight to cool a lava flow in Iceland and save a fishing harbor; and the most absurd of all somehow, Los Angeles Against the Mountains, the persistence of people living in the eroding and also rising San Gabriels, where the combination of tectonic forces lifting the mountains and erosion and fire on their slopes leads to a constant flow of rocks toward LA. Big ones. Tons of them.

The most depressing section was about the Mississippi. Hurricane Katrina made it all too clear how vulnerable people are when they live in places where only many man-made interventions have enabled them to be there—where it would be an entirely different ecosystem and landscape if left alone.

As we know from the story of post-Katrina New Orleans, some people go back, though lot of people didn’t. On the island in Iceland where the volcano erupted, a lot of people didn’t go back, either, but many did. McPhee does a good job of getting the points of view of the people who choose the risk. Some people have no choice—they were born in a threatened place and don’t have the means to move, but others build or buy expensive homes on the slopes of unstable mountains. He finds experts on the geology of the San Gabriels who consciously live right in the path of potential debris flows, as well as real estate agents who blithely talk their way around the risk, reassuring potential buyers more than they ought to be reassured. McPhee’s interest in the human beings involved as well as the earth makes him a great story-teller. A little distractible, a little inclined to collect as many anecdotes as possible, but never dull. He can make alarming and complex scientific material readable without making it any less alarming. The issues are not old. I did a little research before writing this review. People studying the Old River Control structure where the Atchafalaya is being—for now—prevented from capturing the Mississippi still say McPhee’s article that was the basis for this book is the best thing ever written on the topic. Debris flows are still endangering California towns. People still live where nature could cover them up with water, lava or rocks on short notice, and they love those places or need them economically. Taxes pay for the structures that make it possible for them to be there, and for the recovery when disaster strikes. Decide what you think about that, after you read this book.