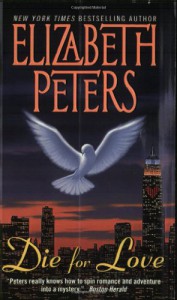 Librarian/amateur sleuth Jacqueline Kirby attends a romance writers’ conference, at which a sudden death that she suspects is a murder takes place. Was it poison? I wonder if this book, written twenty years ago, was meant as a subtle satire on the amateur sleuth novel, as well as a broader satire on the historical romance.

The style and content of romance novels gets skewered, with only one book in the fictitious array being acknowledged as actual literature. The detecting process is clever, and Jacqueline is witty, eccentric, and enjoyable. Though she’s not particularly believable, I never sense that she’s meant to be. All of the characters, while vivid, a somewhat caricatured, and the cliché of the nosy amateur outwitting or assisting the police is as strained and overused as the romance tropes Jacqueline laughs at and decides she can write. I suspect Peters of doing the same thing with the amateur sleuth. All the conventions are there, including the grand finale in which the suspects are gathered with an attempt to force one to reveal guilt.

This is not a serious book, but as light entertainment it makes good summer reading, and an amusing look back at writers, publishers and agents under the old regime. It’s amazing how dated the publicity gimmicks seem, in a book that’s not exactly ancient. Back in the day it seems a romance author could be turned into a minor celebrity. The idea of publishers and agents doing that much to market their authors seems unthinkable now, when even traditionally published authors say they have to do a lot of their own marketing. A number of writers may enjoy this book as a historical artifact as well as an amusing satire on the genres in which they themselves may write.