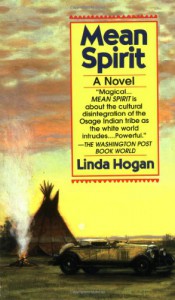 Linda Hogan’s novel about the Osage tribe during the Oklahoma oil boom blends historical facts, Native spirituality and magical realism in a drama about cultural survival, greed, murder, and love—love within families, between men and women, and love for the earth and all that lives on it. The story focuses on multiple protagonists: the members of Greycloud and Blanket families, the seer Michael Horse, and Stace Red Hawk, a Lakota man who comes to Oklahoma as a federal investigator looking into the murders of Indian people for their oil-rich land.

Hogan uses an omniscient narrator to change points of view seamlessly among the major players in the story. The style is suited telling the story of a People, as well as the stories of individual people. Her language is precise and vivid with character-driven flashes of humor. The complex plot is tightly crafted, a compelling story that never slows down. I was impressed with how perfectly she wove every seemingly small and incidental thread back into the narrative, and how elegantly she timed each shift in point of view.

The tragedy in this story has a Shakespearean breadth and depth. Though it has a thread of hope, it is hope surrounded by destruction. Hogan reminds us that we don’t stand outside of nature, and if we try, we will suffer the consequences. At the point where the book almost starts to preach, in the voice of Michael Horse, the humor of his friends taking him down a notch softens the message without erasing it. This is a serious work but you’ll never feel like you’re taking your literary medicine. Hogan captures the heart of Native culture, including the importance of good story-telling.