The Fascinating Science of the Spread of Ideas 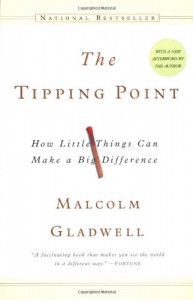 I kept thinking about the concepts in this book long after I put it down. While the examples from epidemiology were familiar to me, the application of similar analysis to the spread of other types of epidemics, from fashion trends to the sales of a particular book, was enlightening.

A few days before I finished reading it, I heard on the radio that the West Antarctic ice shelf has reached its tipping point. It’s crumbling and melting and it can’t be stopped. The message that climate change is real and urgent has never reached the tipping point for Americans, though. Why not?

According to Gladwell, writing back in 2000, a message or a trend needs to be what he calls “sticky” if it’s going to spread. There needs to be something about it that adheres easily in our minds. We respond to human, social cues more than anything else. I related that back to this depressing news. Ocean temperatures and weather patterns and CO2 levels are not human and social. The message is complex and full of mathematical models. I used to live in Norfolk VA, and I felt sad for it when I heard about the tipping point for the Antarctic ice shelf. Sea level rising ten to fifteen feet will damage or drown so many places I’ve loved: friends’ homes; 18th century cobblestone streets; parks where I saw concerts and watched fireworks and ran; the beautiful waterfront Taiwan-American Friendship Garden; and the minor league ballpark where I watched the Tides play. The water may rise two or three feet in my lifetime—and parts of my beloved Ghent district already can flood in a thunderstorm. Why did I digress into all that in the middle of a book review? To illustrate that a personal story is stickier than an impersonal abstraction. That’s how our minds are wired. Anyone who wants people to remember and care about something has to make the message about people.

Another feature of social epidemics and their tipping points is that message has to be translated. Innovators may start an idea, but it’s often inaccessible to the mainstream. Gladwell illustrates translators by describing how fashion trends are spread. They may start with outsider teens, but they are observed by savvy adults who adapt them, modify them just a little, and sell them. And then, of course, the edgy outcasts do something new to identify themselves, and fashion translates it and spreads the next cool thing.

It takes more than translation to make something tip. Personalities matter. Some people, according to Gladwell, are Connectors. They specialize in the art of acquaintance. Not necessarily friendship, but “loose ties.” It’s natural to them to collect people and weave social webs, not with any end in mind but because they enjoy it. Social epidemics need these influential and widely acquainted people.

Epidemics also need Mavens. These are the informal experts in their social circles as well as professional experts, people who relish the collection of information and love to share it. Another necessary link is the Salesman (or woman, obviously, but Gladwell says Salesman). This is a person whose persuasive power is as natural as the Connectors’ social breadth and the Mavens’ fascination with knowledge. Gladwell describes the importance of face to face relationships when he talks about all of these people, and how their genuineness is what makes them effective. Word of mouth from spreads from them because they care. They don’t share because something is in it for them, but for the person with whom they are speaking. When you read the book, you see all of these types in action and understand how hard it would be to acquire their traits if you aren’t one of them by nature, especially the Salesman.

Gladwell doesn’t discuss social networks online, because of the age of this book, but the relationships he describes are qualitatively different from having friends on Facebook or followers or Twitter. I suspect such relationships are now supplemented but not replaced by virtual ones. The section of this book on the effects of facial expressions examines the power of nonverbal communication, which reinforces the importance of in-person connections as well as the influence of television.

Another principle of social epidemics and effective communication is the importance of small groups. Research and experience have repeatedly found that one hundred and fifty is the maximum membership number for a group to have social coherence. After that, the possibility of members really knowing each other is diminished, and the interpersonal influence of the group weakens. A group of two hundred loses the warm but loose social ties that allow good communication. Word of mouth is how social epidemics spread, and we can only listen to so many mouths.

Gladwell’s analysis of smoking contagion and addiction tipping points should be of interest to anyone concerned with smoking prevention and cessation. Negative epidemics spread the same way positive or harmless ones do. Anything can be normalized and adopted if the message is sticky. Its contagiousness is enhanced by being spread by small groups, started by innovators (cool people, often) translated into acceptable terms for others, and shared by Connectors, Mavens and Salesmen. That’s what makes it contagious.

One thing I learned from this book that was new to me was how “tipping” may apply to marketing a book. The public health promotion material was not new, since I keep up with the research in that field for professional reasons. The principle that “dogged and indiscriminate application of effort,” as Gladwell puts it, is ineffective in making an idea or a message tip is well established in community health. A good health educator doesn’t just throw programs at a community and hope they work. Writers, however, are often urged to have a massive social media presence on Facebook, Twitter, Pinterest, Google Plus and everything else, and to get a lot of likes and shares and retweets. I think it’s meant to make a writer tip, based on the idea that if you have enough Facebook friends and enough Twitter followers, people will know your name and buy your book. I have never heard a writer say this works. Even the ones who encourage others to do it say they aren’t aware of getting new readers that way.  To me this sounds like “dogged and indiscriminate application of effort.”

This book has also made me think about what makes the world change, and why major social change is so slow and difficult and can take decades to tip, and yet small changes can spread rapidly. I have summarized a lot here, but such a compacted version is in no way equivalent to reading the book. Think of this as a professor’s lecture that will help you find the key points in a textbook, except unlike many textbooks this book is deeply engaging. Gladwell blends research with illustrative anecdotes in a way that keeps a reader curious and turning the page. I didn’t touch on his analysis of children’s television, teen suicide, needle sharing programs, STD epidemics, the rise and fall of crime, or other topics. You may puzzle over how these connect with trendy shoes, best sellers, and effective health promotion messages, but when you read Gladwell’s discussion of them in terms of the tipping point concept, you’ll see it all come together. He connects diverse fields of study and intriguing individuals to make an abstract idea come alive.