Mystery off the Beaten Paths 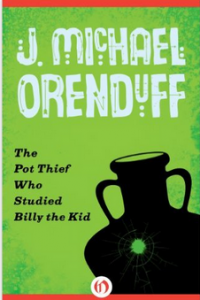 In my opinion, no one writes better beginnings than Orenduff. The opening chapter is a masterpiece. Lured to one of New Mexico’s remote ancient cliff dwellings by a stranger who gives him directions and a unique pot to sell, Hubie Schuze gets into an almost impossible-to-get-out-of situation, stranded in a remote place with only his dog and a wounded coyote for company, after he encounters a dead person’s hand in his search for pots. Having acquired only a single shard, he attempts to get out and ends up with a chipped tooth, a sunburn, and a sprained ankle. And then someone steals his truck.

But of course, he survives to tell the tale to his friend Susannah over margaritas in Albuquerque. A hiker claiming to be a doctor gave Hubie a ride home and treated the uninsured and medically uninformed Hubie by making a cast for his injured ankle with Hubie’s potting clay and telling him to stay off it for six weeks. Doubting that a real doctor would do this, I wanted the  guy to turn out to be a grave robber or another pot thief, but he vanishes with a hundred bucks from his “patient, ”and the absurd cast ends up as a comic prop.

Though Hubie learns a lot about Billy the Kid—information which inspires him to solve the mystery of the body at the cliff dwelling—he starts out studying New Mexico territorial governor Lew Wallace’s books, including Ben Hur. His commentary on Wallace’s writing is so funny, I will never be able to read Ben Hur. I discovered hidden aspects of New Mexico history along with Hubie, including what happened between Wallace and The Kid.

The balance between humor, drama, and deep human connections is outstanding. One of the tiny, isolated towns of New Mexico plays an important role in the plot, and Hubie and Susannah’s visits to La Reina—to the bar, the church, and the curandera’s home—are colorful, funny, and at times deeply moving. The nature of the mystery connected with this town is quite unusual for the genre, as far off the beaten paths as La Reina and the cliff dwellings.