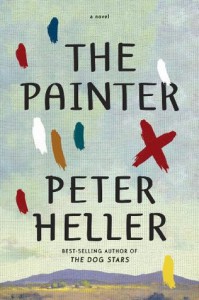 While this is a novel about crime at one level, a nerve-stretching, page-turning suspense story, it’s also the story of a man’s soul, his deepest loves, his darkest corners, his inner light, his passions, and his art. Heller gets inside the process of Jim Stegner’s whole being. When you read this book, you, feel as if you are Jim. You wade into his favorite fishing streams with him, experience his blinding rages with him, fall into the flow of creative inspiration with him, and feel every twist and turn in the road with him, as he navigates his grief over his teenaged daughter’s death, his fame, and his conflict with a dangerous man whose family doesn’t forgive or forget. Ever.

Jim is no saint, but he stands up for the weak, and he does it with fists. When he sees a man beating a horse, Jim fights with him in front of witnesses, breaks the man’s nose and liberates the horse. And so begins Jim’s trip to hell. There are stops in brief but intense heavens of love, painting and fishing, but this time Jim’s inner demons have pulled in some real ones, and they won’t leave him alone.

The landscape of northern New Mexico and southern Colorado is so alive as seen through this painter and fisherman’s eyes that it’s virtually a character in the book, it. The people in Jim’s life—his model Sofia, his friends, his oft-remembered late daughter, the police who question him—are vivid and multi-dimensional, and even the passing minor characters are so finely portrayed they seem to have lives beyond the story. The scenes revolving around art in Santa Fe are drawn from life: the wealthy collectors, the galleries, and the lionizing of the famous man. As scandal and suspicion grow around Jim, so does the value of his art. The confluence of the public pressure for pictures and interviews with the inner pressure from his emotions and the sense of being hunted like prey come together in an explosive and unexpected conclusion.

For an interview with the author about this book, go to

and click on the video for The Painter. The story behind the book is as fascinating as the book itself.