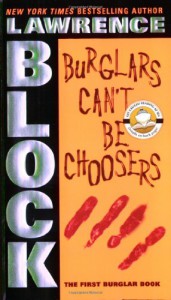 I read this because a fictional character recommended it. In the Pot Thief mysteries by J. Michael Orenduff, Susannah is a fan of Block’s Bernie Rhodenbarr books. I like Susannah and trust her taste in reading, and I believe the Pot Thief series is in some ways a tribute to the burglar series. (The Burglar Who Studied Spinoza, for example.) The law-breaking but nonetheless kind and non-violent protagonist is something the two series have in common, and the witty, quirky first-person narration. In other ways, they are different.

Bernie has no legal occupation and as a consequence somewhat limited social circle, since he can’t tell people what he does. He’s a well-behaved burglar, however. He would never carry a gun. All he wants is to steal from the rich and otherwise stay out of trouble, but he ends up framed for murder when he breaks into an apartment with a dead body in it. His attempts to clear himself are clever, devious, illegal, and funny. While the reader doesn't fear for Bernie's life, there’s plenty of suspense with each escapade, while his freedom is on the line.

The only flaw I found was the convoluted presentation of the solution to the murder mystery, packed into dialogue without much action. The secondary mystery around Bernie’s romantic interest was wrapped up with more style. (I knew she was up to something, though I didn’t figure out what.) Definitely a fun read.