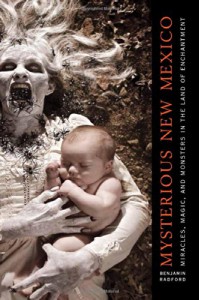 It was intriguing to read the methodology of man who investigates paranormal claims. Since his goal is to disprove them all, the book might better be called “Not-So-Mysterious-After-All New Mexico.” The topics in the book range from ghosts to miracles to UFOs to monstrous birds, crystal skulls, and of course the legendary La Llorona, who is creatively depicted on the cover.

Each chapter takes a predictable path. The author introduces the legend or event, the people who believe in it or did in the past, makes it sound as if he thinks it would be so wonderful if it were to turn out to be true, and then through a mixture of on-site experiments and historical or scientific research, he shows why it just ain’t so. If there was an intentional scam, he gives the scammers their due. If it’s an honest error, he makes an effort—not always successful— to sound respectful of the people who believe, explaining how memory can be faulty and attributions made to non-causative events. He does show great and sincere respect, though, for the dead who are falsely accused of being ghosts, pointing out how this dishonors their memory.

Unexpectedly, the author includes an actual unsolved serial killer case, and readily mentions the names of two deceased men who were suspected of being the killer but never proven guilty. This strikes me as a worse blow to someone’s legacy than being described as haunting a hotel or a theater. He also mentions the name of a living person who was cleared of guilt. Why do that to him? This chapter doesn't fit well in the book. The author brings up psychics who failed to solve the case as a way of forcing it to fit into the paranormal theme, but the Albuquerque police have so far failed to solve it, too, and I’m sure he doesn’t mean to discredit them. He does a good job of explaining why it’s been so difficult.

My favorite chapter is the one on the Old Cuchillo Bar, in which the author concludes that if the place isn’t haunted, it ought to be. It makes me want to visit it. He’s at his best when investigating things like this, explaining the physics behind why a certain cabinet opens itself, or when he examines the source of an apparent ghostly image on security camera footage at the Santa Fe Courthouse. That chapter is the funniest in the book, full of the city’s quirky personality.

The author is occasionally too much present in the narrative, but overall he writes well, turns a good phrase and tells an engaging story.