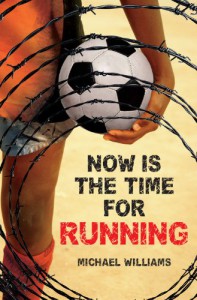 At the beginning of the story, Deo, a fourteen-year-old Zimbabwean boy, has not seen much of the world. He plays soccer with his friends. He keeps an eye on his very special older brother Innocent, a sweet but damaged young man who suffered a brain injury at birth. Innocent is one of the most irresistible characters I’ve ever come across. Deo is understandably dedicated to him. The relationship between the brothers is the jewel at the center of this plot.

When political violence takes the adults from their lives and drives them from their village, Deo has courage, but no worldly wisdom or experience. He does his best, but his naivety leads him into mistakes. The boys’ journey for refuge in South Africa is an adventure, but also a tragedy. Like many desperate border crossers around the world, the brothers risk their lives to reach the other side—where they hoped to be free and safe—only to find that it can be dangerous and hostile.

Like the companion book Diamond Boy, this story doesn’t make a superhuman hero of a teenaged boy, but tells his story in real terms. Deo can’t do it all himself. His only real skill is playing soccer and his only sense of purpose, his devotion to his brother. Holding trauma and despair under his surface so he can survive and take care of Innocent, he needs help from adults who care.

I don’t usually finish a book in a few days, and I usually don’t finish a book written in the present tense, period. But I flew through this one. The present tense vanished into the flow of the story, and only became awkward once or twice that I noticed. I can’t say that it enhanced anything, but it didn’t distract me the way it normally does. This is a moving book, authentic and powerful. The narration is straightforward and simple, a boy’s voice. Though they are the same age, Deo is more of a child is some ways than Patson, the narrator of Diamond Boy, who is a secondary character in this book. It’s more clearly Young Adult in style than Diamond Boy, but like that book, it’s not light reading in any way. Mature, thoughtful teens will appreciate it, and so will their parents.