Waking up from the American Dream 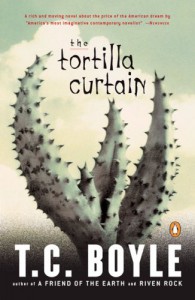 I’m glad I read John McPhee’s Control of Nature before I read this novel. Part Three of that book, “Los Angeles against the Mountains,” prepared me to understand the environmental and socio-economic setting for this book, a wealthy enclave in the geologically unstable, fire-prone parts of California above the city. The insanity of the development of expensive real estate in that area is part of this story.

The Tortilla Curtain juxtaposes the lives of an Anglo couple residing in the aptly named Arroyo Blanco subdivision with the lives of a Mexican immigrant couple who camp in a nearby canyon. Everything in the wealthy neighborhood has a Spanish name and Spanish-influenced architecture, but Hispanics are only visible there as maids, gardeners, construction workers, or pool maintenance workers—until they become visible as a perceived threat. I’ve seen a neighborhood like that when visiting friends in San Antonio TX, and I felt as if I’d landed on an alien planet. If I hadn't seen it, I’d have thought this fictional depiction was extreme, but it’s not.

Delaney, the husband in the Anglo family, suffers from cognitive dissonance. He values nature and freedom and human rights. His beloved wife, the bread-winner of the family, values real estate, security and safety. So do his friends. A nature writer whose challenges so far have been encounters with wilderness, not with people unlike himself, he’s been a liberal with nothing to be liberal about. When circumstances strain him and he encounters the dissonance, he discovers aspects of himself that he wasn’t looking for—and he's not the man he thought he was.

Candido, the Mexican man, has been seeking the American dream. Not riches, but an apartment, a job, indoor plumbing, electricity, a car. He promised it to his young wife. Unable to give her what he believed he could, he also finds that he’s not the man he thought he was. She is the most sympathetic character in the book: struggling, uneducated, strong, loving, and vulnerable, a victim who doesn’t want to live like a victim or to see herself that way. While I didn’t feel as deep a connection with the other characters, I was nonetheless riveted to their parts of the story. Boyle gets inside their minds without judging them, no matter what they do.

The painful ironies in this book are so strong as to border on satire, but they aren’t funny or exaggerated. People sometimes do care more about pet dogs or property than their fellow humans.

The end is provocative. It left me imagining another entire story, and yet it completed this one perfectly.