A Good Puzzle of a Mystery 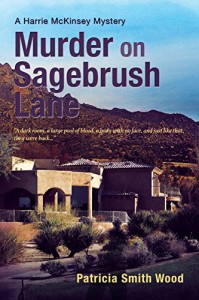 Patricia Smith Wood’s second book in the Harrie McKinsey series picks up three years after the events in the first, The Easter Egg Murder. Dutyuring the elapsed time, editor Harrie McKinsey has married an FBI agent, giving her a natural connection with law enforcement. Wood’s blend of detective work by police, FBI, and a believable amateur works well again. I say a believable amateur because while Harrie handles the stress of the situation with courage, she is affected by it in the way one would expect a non-professional to be. Harrie’s intuitive dreams play a smaller role in this book, but remain part of her motivation to ask questions about a murder.

The crimes in this book revolve around an important place that may not immediately come to mind when people think of New Mexico—Sandia National Laboratories. The attempted sale of government secrets from this research facility in the Albuquerque area and the murder of a Sandia Labs employee are the central mysteries. Alongside these runs the question of what will become of the blood-stained toddler who shows up in Harrie’s flowerbed the morning of the murder. The suspense is strong and Harrie is often in danger, but there is little violence onstage. The bloodiest event has already taken place when the story begins.

A reader could start with this book and go back to the first without feeling the sequence was a problem, aside from the minor issue of a lack of physical descriptions of some of the returning characters. The relationships are established clearly without an excess of backstory.

Wood manages a large cast of characters in complex scenes remarkably well—not an easy feat—as well as the interactions of multiple investigative agencies. She delivers a satisfying string of revelation scenes toward the end, none of which is the conventional confrontation-confession. Once I finally found out whodunit, I realized that the clues were there, but that I’d been sidetracked by all the other possibilities. Readers who like to give their brains a workout trying to solve a mystery will enjoy this. It’s tight, precise, and effectively paced, with every chapter turning the plot through yet another unexpected twist.

A new character I found particularly strong and engaging is Sgt. Cabrini Paiz of the Albuquerque Police Department. She deserves her own series, or could share the lead in this one, should the author be so inclined. There are precedents for this sort of shift. When James D. Doss wrote his first book, The Shaman Sings, Granite Creek Colorado police chief Scott Parris was his primary detective. Southern Ute Tribal Investigator Charlie Moon (nephew of the shaman of the title) showed up to assist him, and in that way that characters have, Moon took over. Not the investigation, but the author’s creative mind. The series became the Charlie Moon series, with Parris moved to a major supporting role. I like the books featuring Harrie, but I think Sgt. Paiz has equal potential as the protagonist of a mystery series, and I hope to see more of her.

Related posts on my blog:

The convention of the confrontation and confession