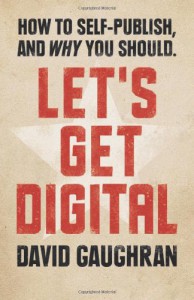 This review is organized according to the number of grains of salt with which I think a reader should take David Gaughran’s advice.

When Gaughran has done his research and adequately documented it, he’s informative and persuasive. When he bases his advice on his personal experience and that of a few other writers, he uses only anecdotal evidence—not the strongest kind on which to base advice, but grounded in at least this weakest level of proof. Occasionally he draws conclusions without indicating even that level of support, which makes it hard to tell if he’s out on a limb or on solid ground. Once in a great while, I caught errors that I was pretty sure were factually wrong.

This book is worth reading for the content on the bookstore business alone, if one is not acquainted with it. I used to work in it, and he describes it well. A new book by an unknown, traditionally published author may have a short life on the shelves, ending up in remainders and then out of print. His analyses of the returns system, and of advances and traditional publishing contracts, while filtered through his pro-self-publishing bias, are nonetheless factually accurate.

He gives excellent advice on getting ready for self-publishing. Anyone who thinks they can edit their own work and only have their friends and family critique it should read this. He says editing is an education. Going through an editor’s changes teaches an author about writing. First time not-yet-published authors should read the section on editing and read it again. If everyone took this advice the unready would stop putting their work out there.

Gaughran identifies scams in a short chapter, but leaves it up to Writer Beware to give more detail on what they are how they work. In doing so he identifies a good resource—and the fact that many of those scams are owned by major publishing houses.

He gives good advice on reviews.

He says that readers won’t buy books with Digital Rights Management as often as they’ll buy those without but gives no evidence to support this opinion. I did a very informal survey to get some input, and can’t conclude from it whether or not DRM affects sales. Some readers avoid e-books that have it, some don’t even know how to tell it’s there, and others just strip DRM if they don’t want it, claiming it can be done in less than minute. This third group supports Gaughran’s hypothesis that DRM is teaching readers to be “pirates,” though what these readers normally do with the e-pub files they create this way is move them to their Nooks or Kobos and read them. I suppose they could also e-mail the files to friends to save them the trouble of stripping and converting, and not think of themselves as pirates, and it would still be a lost sale, an invisible cost of not publishing to all platforms.

I suspect Gaughran underestimates the importance and longevity of paper books and physical bookstores. He scarcely mentions libraries.

I think an author looking for marketing tips should read this. A huge and pervasive social media presence apparently isn’t necessary. Gaughran sorts out “things that make you feel icky” from things that don’t—and according to him, the ones that don’t feel icky are the ones that work. Tweeting promos all the time: icky and ineffective. Oddly, he identifies hanging out on Goodreads in the “feel icky” category.” I found the blatant buy-my-next-book push at the end of his book to be icky, but apparently it didn’t feel that way to Gaughran.

He may underestimate the influence of the perception that self-published work is all crap. I’d agree that it’s a waste of time to go into a rant about the crap, though, and more important to focus on how to avoid adding to it.

Overall, this book is a little Amazon-centric. He assumes, while providing no support for that assumption, that the other e-book retailers don’t have good customer service. He does a good analysis of how Amazon’s marketing algorithm work and finds their aggressive personalized marketing a good thing. Maybe it is. I bought a replacement laptop cord from them once and they have been hounding me with offers of what’s new in electronics ever since. I buy all my e-books from Barnes and Noble and they never bother me. I call that good customer service, but to each their own.

Gaughran offers limited ideas of where to find cover designers, and seems to have no idea about professional writers’ groups. Sending people to K-boards is his favorite option. I left it after finding it less than useful, but other may find a home there. That’s my anecdote vs. his anecdote. Neither is especially valuable.

I had no idea what to think about his information on the file size of the picture that goes in the e-book and of the one that goes on the retailer’s web site. I have my file conversion and formatting done by Draft2Digital. I’ve noticed that other authors’ e-pub files are often larger than my files for my longer books. Perhaps my cover art is not taking up as much space. Gaughran says to make sure your files aren’t huge because Amazon charges for file delivery. This puzzles me. If you set a price at a certain level, how can they do that? Do they reduce your royalty? Refuse to let you set that low a price? Since I convert to mobi and have the cover already installed through D2D, so I have no experience with a file size issue. Maybe someone else will know if it is irrelevant on Gaughran’s part to mention this or actually useful.

He’s Kindle-centric when it comes to checking formatting. You need to look at a mobi in a Kindle previewer and look at an e-pub in Adobe Digital Editions.

Gaughran gives useful information on when to upload directly to an e-book retailer and when to use a distributor. He is unclear in describing the distributors’ cut, though. For the one I use it’s not 10% of each book sale, but 10% of my 60 to 70%, a smaller amount.

The book is full of links to his blog. For me, this was annoying. If the material is important it should be in the book. I’m not normally online while reading an e-book and I had to remember to and go back and check things. I’m sure I missed quite a few blog links. If your e-reader is on your computer and you are always online, or if your e-reader has Wi-Fi, this won’t be an issue, but it was for me.

He suggests using Library Thing. Last time I looked the discussions were moribund and the groups small. He doesn’t seem aware of Booklikes, which seems much livelier.

I’m not sure what to think about his tax advice to international writers, but he is one, so maybe he knows.

He does a fairly good analysis of KDP Select from his point of view. It’s not based on research, though, or if it is, he doesn’t cite it. The less appealing changes in the program are described well. He doesn’t address how authors’ exclusivity to Kindle affects readers, though, an issue few authors seem to think about. (Here is a link on KDP Select sales as seen by another author—more anecdotal evidence:  http://noorosha.com/why-exclusivity-is-bad/)

Gaughran’s major marketing tool is the mailing list. He encourages having clickable links in the end-matter of a book to get readers to sign up for them, buy other books and get to your blog etc. I once had a beta reader tell me to take such things out of a short story because most people, he said, are not online and it’s just clutter. I’m not sure who’s right. The new release mailing list seems sound, though, even if only a percentage of readers actually click on such a link.

The information on ads and how to run them and which sites are reputable is complex, and as Gaughran says, may be dated, as some sites go up or down in readership and prices. He has no data on overall success rates of ads, though, only his personal experience.

He advises authors to learn to do their own formatting, but my experience with D2D is that their formatting for mobi, e-pub and paperback is done so well and with such good customer service, I have no wish to do it myself, especially if I’d have to set up all the separate accounts for Create Space and each of the e-retailers who comprise about a third of my sales combined. Smashwords authors I know also seem happy with both the service and distribution. He doesn’t know that D2D does Create Space formatting even though he uses them for some of his e-books. He makes paperback formatting sound hard and says you have to do it yourself or hire another person.

Gaughran states that you can upload to Kindle through D2D and Smashwords.

Smashwords web site says this at the time of my writing this review:

Although we have a distribution agreement with Amazon via their Kindle Direct Platform, they're unable to receive our entire catalog until they create a bulk upload facility.  In the meantime, we're only distributing a few hundred titles to Amazon out of our catalog of over 250,000. We understand that many Smashwords authors would prefer the convenience of consolidating their distribution to Amazon via Smashwords, rather than uploading direct to Amazon.  If your book has earned over $2,000 at Smashwords and you would prefer to consolidate your distribution via Smashwords to Amazon as opposed to uploading direct with them, please click the "support" link at the bottom of this page and let us know you're in the $2,000 club and would like to be considered for our distribution to Amazon.

Amazon Kindle no longer is willing to work with D2D and delisted all their authors in Feb. 2014, making them re-upload directly. (It was easy, but my earlier reviews vanished with the delisting.)

The success stories from other indie authors were tedious, repetitive padding—data-free anecdotes that added nothing the value of the book.

If you have never self-published or are undecided about it vs. pursuing traditional publishing, this is worth reading. If you have successfully self-published, have won awards and/or contests that confirm you have published good quality books, and have more favorable than unfavorable reviews but still have slow sales, you might benefit from the chapters on marketing and skip the rest, or just read his blog. I plan to try out some of his marketing tips and see if they work. I need to see if they do before I think about buying his next book.

Note: I read the 2014 revised edition which I received in an e-pub version as a gift from my distributor.